My paper with Oleg Starykh, “Quantum Lifshitz field theory of a frustrated ferromagnet” was just published in Physical Review Letters.  Our original title, which is in the version we posted on the arXiv back in October 2015, was “A panoply of orders from a quantum Lifshitz field theory”.  We had quite some argument with a referee, who objected to the title, and despite my fondness for getting obscure words into physics publications, we adopted the new title.   A panoply is “a complete or impressive collection of things.”  This was inspired by the remarkably rich phase diagram of a very simple model: the spin-1/2 1d Heisenberg chain with ferromagnetic nearest-neighbor interaction and antiferromagnetic second-neighbor interaction.  In an applied field, a variety of interesting phases emerge.  Individually, these have been understood, but our goal was to synthesize all the different phases together to find a unified picture. 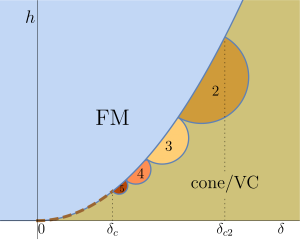 The referee objected because we were not successful at a complete and rigorous synthesis. But I think we got pretty far.  What we uncovered was a simple and novel quantum critical theory, which captures the universal aspects of the system, and for which many (but not all) properties could be obtained exactly.  Moreover, we could show that it explained a first order metamagnetic transition, a vector chiral phase, and a spin nematic state.  Maybe not enough to be a panoply in terms of completeness, but I at least was impressed by how far this simple field theory could go.   You can read the paper and decide for yourself.